Mountain Fuel are delighted to be teaming up with Bolt Race Team for the Zwift premier league elite race series. 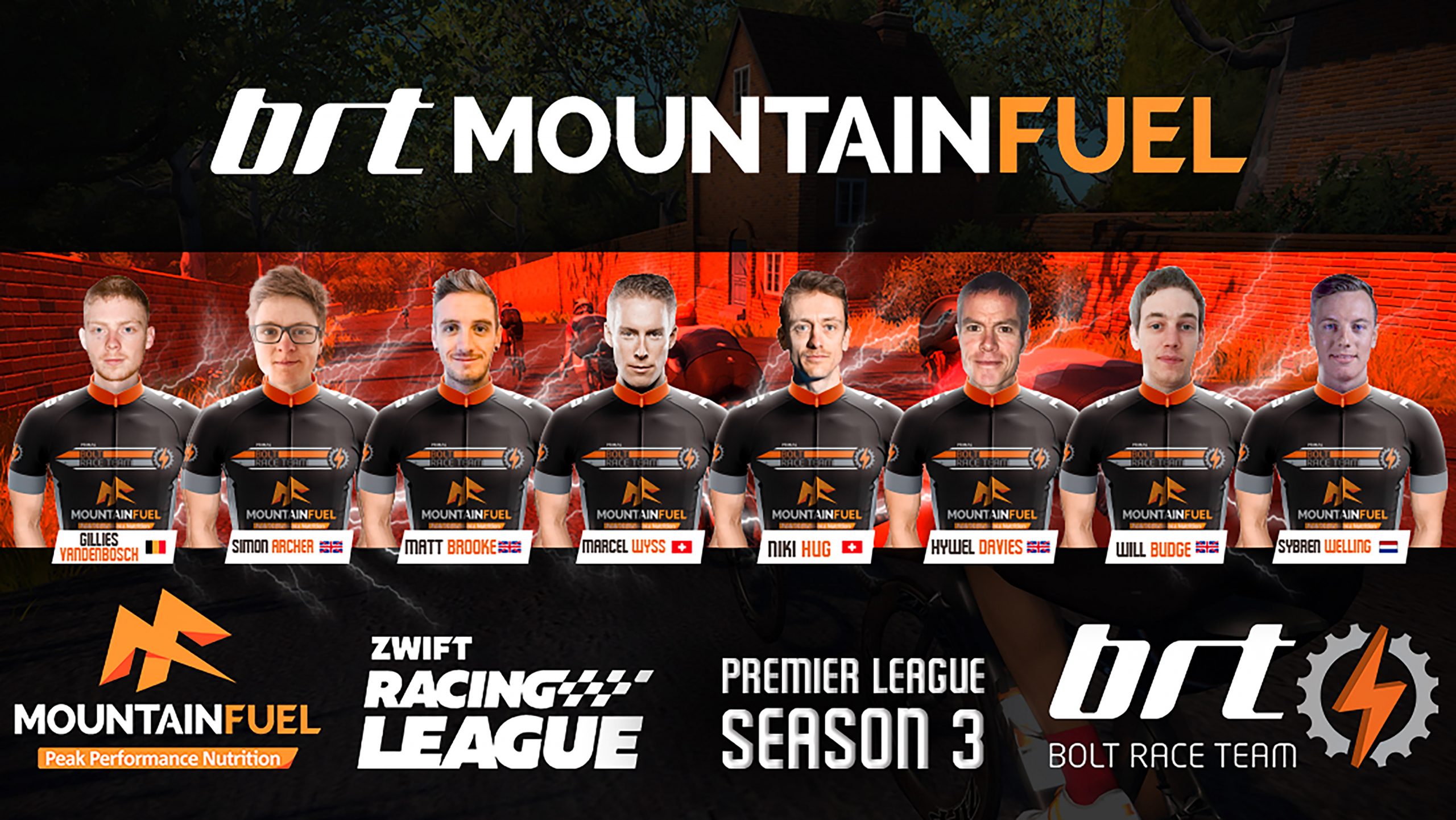 Marcel Wyss
Marcel was a professional rider from 2009 to 2016, riding for Cervélo, GEOX, Netapp and IAM Pro Cycling. He has ridden six Grand Tours, with his best finish being a 21st on GC at the 2016 Vuelta a Espana. He has three professional victories to his name and twice finished in the top 10 at the Tour de Romandie. Since retiring from professional cycling, Marcel has started a coaching company, Wyss Training, and joined Zwift in 2019. He is a very strong addition to the BRT team and will bring great experience and strength to the team going forward.

“As an elite athlete for over 20 years I know fuel can be that 1% difference from the podium to failure. With Mountain Fuel being our supplier of nutrition I am now looking forward to being on that podium!” Marcel Wyss

Niki Hug
Niki is a top climber in Zwift and on his home roads in Switzerland, placing third in the 2019 Swiss Masters National Championships. Niki gets frequent mentions on Zwift race broadcasts for having won the Tour for All Invitational race in May 2020 by using the powerup in the final kilometer and sprinting off the front of the group while temporarily invisible to the other riders, then holding on to take the win by 0.077 seconds.

“What better fuel could there be for a climber than Mountain Fuel! Looking forward to prepare, keep running and recover the engine with our new partner Mountain Fuel in the upcoming ZRL season” Niki Hug

Hywel Davies
Hywel has been with BRT since early 2019 and has recently taken his racing to the next level, performing strongly as a core member of the BRT team in invitational races and TTTs. He was the British Cross-Training Champion 1996-2004, World and European Champion 2004, Indoor Rowing World Record Holder 100km, 25x Ironman finisher as a professional triathlete, British Double Ironman record holder and most recently won the Zwift 3R Sundown Series general classification in the A+ category.

“Riding through the winter has been a breeze, but as the temperature goes up, racing indoors needs a bit more thought. It’s great to have Mountain Fuel providing the right nutrition to fuel and hydrate as litres of sweat pour out of the bike shoes” Hywel Davies

Will Budge
Will started racing on Zwift in 2017 and is a strong puncheur who excels on uphill finishes. Will’s racing has developed well during the Zwift Racing League making the role of ‘gap closer’ his own in all four team time trials and competing for team points in the points races. Outdoors, Will rides for PeaceFIT Racing and loves targeting hilly road races near his home in Bristol, UK.

“Working with Mountain Fuel will give BRT the quality that we need to train and perform on race day. Their fuelling and recovery system will help to BRT to the next level” Will Budge

Matt Brooke
Matt is a London-based triathlete working in the architecture industry. Matt was originally a 100kg rugby player, then spent a few years as a 90kg rower and now a sub-80kg triathlete and Zwifter. Matt currently holds a handful of Ironman 70.3 AG podium places including 1st at Staffordshire 2019. Matt’s big engine has helped BRT to strong performances in TTTs and road races in the Zwift Racing League and is looking forward to further contributions to the team.

“With their sport nutrition management it’s great to have support and guidance from Mountain Fuel. With bars that taste so good it’s going to be hard to save them just for training and racing” Matt Brooke

Simon Archer
Simon is a Scottish cyclist who came to the sport in 2018 whilst studying maths at Imperial College. Since then, he has worked hard to go from being dropped in his first few Zwift races to racing at the top of the game. Now working as a software engineer Simon fits Zwifting in whenever possible. Riding for Team Andrew Allan Architecture on the road Simon has only had one season that wasn’t impacted by Coronavirus but managed to progress from Cat 3 to 4, picking up podium spots along the way.

“I’m very excited to have Mountain Fuel on board this season. Their products are going to be an invaluable help to fuel and recover through 8 intense weeks of racing.” Simon Archer

Gilles Vandenbosch
Gilles is a Belgian U23 rider who loves riding and racing uphill. He began his athletic career as a high-level runner before moving over to cycling in 2017. He has two victories and eleven top 10s in amateur races in Belgium. Gilles has been a regular contributor to The BRaT Pack TTT team and should bring further strength to a BRT Zwift Racing League squad already brimming with talent.

“Good nutrition and hydration are essential to archive solid results, Mountain Fuel will be perfect for the Premiere League, and will guarantee us the perfect fuel for race and recovery” Gilles Vandenbosch

Sybren Welling
Sybren started competitive cycling after national level rowing in 2015. He quickly progressed through the Dutch ranks and is currently active at Elite level in the Netherlands. He has been on the podium in a national classic race and achieved some nice results at professional UCI races. In the winter he competes in beach racing, gaining 11th place at the European Championships in Dunkirk last December. Sybren uses Zwift to supplement his road race training and has been a valuable contributor to the BRT Zwift Racing League team through season 1.