Everesting – Cycling Challenge – Pick any hill, anywhere in the world and complete repeats of it in a single activity until you climb 8,848m, the equivalent height of Mt Everest.

Not for the faint hearted, Everesting is described by Hells 500, keepers of the Everesting Hall of Fame, as “fiendishly simple, yet brutally hard.” Sounds like a fun day out, right?

First though, a bit of background to our Everesting ride. Holmfirth Cycling Club has been teaching kids to ride bikes since 2013 but there is an economic barrier to cycling and many children don’t have access to a suitable bike and a safe and enjoyable place to ride. This situation will be exacerbated by the economic downturn resulting from the Covid-19 pandemic. Children from homes experiencing financial hardship may be unable to access facilities for sports and recreation. To tackle this, I decided to Everest to raise money for new bikes so that every child in the area can access cycle coaching and develop a love for activity, challenge and adventure that so many of us share.

For a little more background or to donate (before 11 August 2020), go to https://everestingholmfirth.wordpress.com/

Originally conceived as a solo ride, I was delighted when coached athlete Hannah Tweddell allowed herself to be talked into joining me. It turns out having company on a ride like this is a big motivator.

Like any ultra-endurance event, planning is critical for an Everesting ride. Location, date, weather, equipment, pacing and nutrition all need to be considered.

Picking the hill for the attempt was crucial and I found the ideal “Goldilocks” spot not too far away on Bradshaw Road, Honley. At 8-9% it’s steep, but not too steep. It’s straight for a fast descent and is close to civilisation in case of emergencies. It would mean a total of 58 ascents and a total distance of nearly 220km.

When it came to fuel, there was only one place I’d go. Rupert and the Mountain Fuel team set us up with our core nutrition for the day – Raw Energy Fuel, flapjack bars and a mix of jellies – so we could do most of our fuelling on the go. A support crew handing out bottles and snacks at the turn around helped us to minimise stops and keep the wheels rolling.

July in Yorkshire gave us a favourable 16 hours of daylight to work with. Sadly, it also brought us driving rain and strong winds on our target Saturday. Luckily, the forecast for our contingency day on the Sunday was perfect and we began at 5.30am, with clear skies and a light tail wind, as the sun rose behind Castle Hill.

Enraged by our good fortune, the Puncture Gods struck early, but a spare wheel from the support crew soon had Hannah up and rolling again and we remained puncture free for the rest of the day.

We pressed on through the first 20 laps in about 4h15, making the most of the early enthusiasm, delighted to have ticked off the first third of the ride and ahead of schedule. After a quick stretch we were back on it for another 10 laps. However, as if inspired by our ride, the temperature also continued to climb into the mid 20s, pushing up my heart rate and leaving Hannah looking like a human salt stick.

Breaking for lunch at 1pm we had over 5,000m of elevation in the bag in just over 7 hours. However, the hurt was starting to creep in as we contemplated the fact we still had around 4,000m of climbing to go. 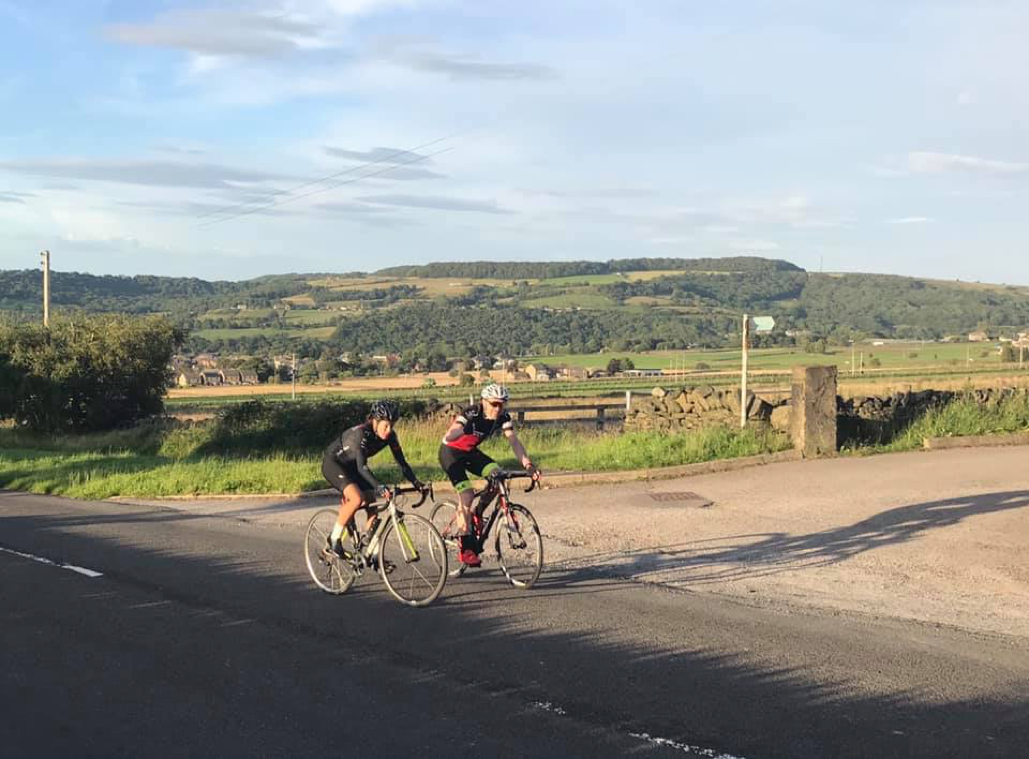 It was inevitable that progress would slow a little in the afternoon as the pace that felt fine at the start became increasingly tough to hold. Digging deep, we kept the lap times on track and normalised power only dropped by about 10W over the afternoon. However, the repetitive strain of riding a bike up a steep hill for that long was taking its toll and we relied on more regular stops to stretch our backs. This also allowed us to break the ride into more manageable chunks of 5 reps, which provided a much needed mental boost during those final hours.

Throughout the day we had support riders popping in to complete one or more reps with us. We might not have had much to say while they rode with us, but we appreciated the company all the same!

Finally, as the sun was starting to set at 8pm, we started our final ascent. Just the two of us, side by side, cheered on by friends and supporters with cow bells and Queen’s “we are the champions” greeting us at the top.