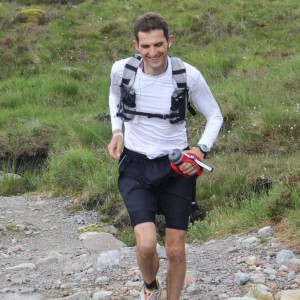 When planning my race strategy, my starting point was the checkpoints where we were allowed drop bags. This is important for a couple of reasons; firstly, it means I can reduce the amount of personal nutrition that I have to carry for the race and secondly, it means that I can have access to my personal favourite goodies at a number of points.

Based on my performance in last year’s race, the drop bag points split the race into sections of 2, 3 and 4 hours. Knowing I was well fuelled on the start line, I decided to run the first section with 700ml of Mountain Fuel Xtreme Energy drink (500ml bottle plus 200ml soft flask). From the start, I want to spend a couple of hours just getting on with some running, not thinking about nutrition and the drink allows me to do this knowing that I’m still looking after myself for later in the race.

As I approached the first drop bag point (significantly quicker than last year) I had a clear plan in my head about what I was going to eat and what was going into the pack for the next 3 hours. Originally, I intended to eat a smoothie, fill my bottle with Xtreme Energy drink, pack away another sachet of Xtreme Energy and a salted flapjack bar and finally carry my soft flask with water in to drink on the climb out of the checkpoint.

However, due to a problem, as I arrived I was told the drop bags would be at a different checkpoint and , another 1:15 hours further along for me. I admit, there was a moment of panic  as I could not have my Mountain Fuel but I had to deal with it. I filled both my bottle and soft flask with water, popped in a mouthful of flapjack and grabbed two emergency gels from the stash the race had provided. I avoided the temptation of the chocolate/jelly babies/etc, not wanting to get a sugar spike.

Over the last year, I’ve been using gels less and less, but felt that if I could just use one to keep my energy levels topped up until I could get to my drop bag (to me now a gel is emergency fuel, not a main source of fuel), then it would have to do. I am now more comfortable with the idea of running long distances on relatively little fuel – the body copes. In the end, I reached the drop bag point without any distress and, in fact, covered the ground really well as the Mountain Fuel was still working.

I was relieved to get hold of my planned nutrition and shoved in the smoothie, mixed up an Xtreme Energy drink and popped another sachet and the salted flapjack into my pack. Psychologically, I felt I had come through a minor crisis, was now back on track and set off in pursuit of a podium place with renewed vigour.

I tried to do some calculations as to the time through to the final drop bag and realised it was not long enough to get through all my energy drink over this section, so I just tried to sip, swill and swallow at the same rate I had been doing and just poured out what was left as I reached the next water point before using the second sachet of Xtreme Energy. This is one of the reasons why I prefer using bottles rather than a bladder as I can keep track of exactly how much liquid I am taking in. Along the way, I supplemented the drink with small bites of salted flapjack every 20 minutes or so and chewed on some beef jerky. I’m basically trying to keep adding small bits of fuel constantly without putting myself into gastric distress.

At Osmotherley (the final drop bag point), I spent 3 minutes getting myself sorted for the final 3:30 hours, having another smoothie and a drink of coke. I left with another bottle of Xtreme Energy drink, 2 more sachets and another salted flapjack.

The next water station was only 1:10 hours away and then less than another hour to the final water point so I felt that I would only need to supplement the drinks with a small nibble of flapjack and an occasional chew of beef jerky. By this stage (over 7 hours of running), I was running well, had moved into 3rd place but could feel that my stomach was starting to pack up. The flapjack was starting to appeal less and less, so I simply made the decision the go with liquids only for the final 90 minutes, sipping small mouthfuls of Xtreme Energy. It is, in some ways, nice to get back to this simple nutritional strategy as it takes the mental effort out of this element of the race and allowed me to concentrate on holding on to my podium position. The last half bar of flapjack remained uneaten but my energy levels and, most importantly, speed over the ground remained good right through to the finish after 8:24 hours. A PB by 33 minutes and a podium place!

During that first half an hour after finishing I managed to get a Mountain Fuel Recovery drink into me (had to be made with water as I forgot to pack my favourite soya milk which I usually mix with the recovery drink), had a gentle massage and was then ready for some veggie chilli.

The recovery process was now underway and I had another recovery drink in the car on the way back to our accommodation and made sure I had a bottle of water with me during the night for more hydration sips whenever I woke up, though that was not very often that night.