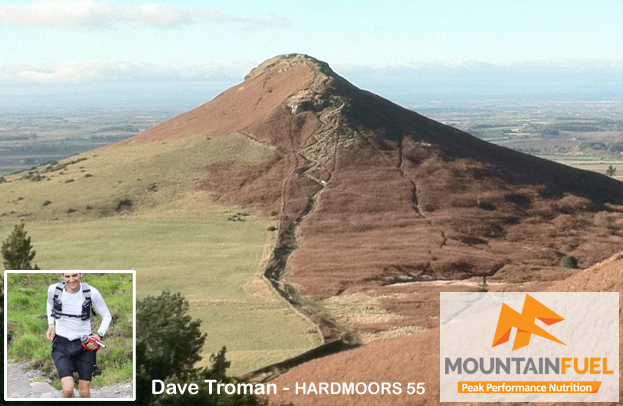 I recently completed the Hardmoors 55 as part of my training programme for the Lakeland 100 and the following is an insight into my on-going attempts to improve my hydration and nutrition strategy. What ever your discipline and distance I think there are interesting points you could apply to your own hydration and nutrition strategy and I know the guys at Mountain Fuel would love to hear what works for you to.

For the week leading up to the race I had two pre-occupations; recovery and hydration.

I had probably slightly over-extended myself during the mini taper, particularly on the Sunday before the race and I knew that I had to give my body a chance to repair. I backed right off from training during the final week, just going out for a few easy training sessions and concentrated on recovery.

I made no changes to my normal eating habits, just making sure I was taking in a balanced diet, however, on the Monday and Tuesday, I supplemented this with a sachet of Mountain Fuel Recovery drink mixed with soya milk straight after my easy training sessions. Each evening, I spent a few extra minutes on various foam rollers/balls just trying to easy off some tight muscles and Wednesday, Thursday and Friday nights I took some Mountain Fuel Night Fuel, again mixed with soya milk, continuing the repair process over night.

One of the many lessons I have learnt since working with the chaps at Mountain Fuel concerns my hydration preparation in the final week before a race. Previously, I would get to the day before a race and throw in water in a bid to hydrate myself for the following day, feeling bloated and spending most of the time needing to urinate. Now, I treat this process as a week-long project, with the mantra “sip, swill, swallow”. I tried to have a water bottle to hand when at work and would just grab a mouthful at regular intervals and swill it around my mouth before swallowing. Little and often prevents that bloated feeling but still gets the hydration issue sorted.

On the Thursday and Friday, I made one of my bottles during the day a Mountain Fuel Xtreme Energy drink to make sure my muscles are fully loaded with glycogen, ready for the battle ahead, still living by the “sip, swill, swallow” regime.

Working from the textbook, I do not do anything different on race day: don’t try something out that you haven’t already tried out in training. Breakfast consisted of jumbo porridge oats (an alternative is you don’t like anything too heavy on your stomach is Morning Fuel which is light and easily absorbed)  made with soya milk and I added to this a spoonful of flax seeds, some milled pumpkin seeds and linseeds, a handful of dried fruit (sultanas, raisins, cranberries, etc) and finally a drizzle of pure maple syrup. Along with a small cup of coffee, I took a glass of water to continue the hydration process.

This was taken at 6:45am, with the race starting at 9:00am. This gave plenty of time before the start, though I do find this less of an issue with the relatively low intensity of an ultra race.

My final element of pre-race preparation was mixing up another bottle of Mountain Fuel Xtreme Energy which I sipped during the car journey to the race and during the registration process, taking about an hour to drink the 500ml bottle.

With this preparation, I feel that I am hydrated, fuelled and, most importantly, confident in my nutrition strategy. There are many things that can go wrong during an ultra race so you have to try and control as much as you can. By following this plan, I can stand on the start line confident in my preparation, therefore reducing one element of potential anxiety.

My report on my actual Race Nutrition is to follow shortly…

If you haven’t had a chance to try out Mountain Fuel for yourself I suggest their Trial Pack which is great value.